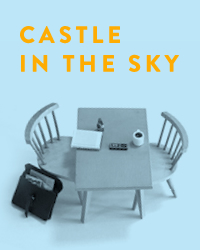 CASTLE IN THE SKY

"Call it a Greco-Albertan tragedy... Unconventional... A fascinating and heart-rending hybrid of documentary and poety... Hugely dramatic" The Calgary Herald

How could a twelve year old girl learn to hate so profoundly that she would murder her whole family? Is there anything positive or even beautiful to be taken away from this? These questions led the members of Castlereigh Theatre Project to The Gas City of Medicine Hat, Alberta, in the year following the events of April, 2006: when a twelve year old girl and her twenty-three year old boyfriend fatally mother, father, and six year old brother. Among the many community members interviewed were friends of the killers, friends of both families, police, teachers, politicians, crime reporters, psychologists and citizens, resulting in a treasure trove of details and perspectives, most of which never reached the courtroom or news media. An intriguing study of violence, heartbreak and healing seen through the eyes of a community dealing with the unimaginable. www.castlereigh.com